I know this is site is largely focused on bass fly fishing, but I have a confession: I’m a tarpon freak! Here’s some thoughts on my transition into the wonderful world of baby and juvenile tarpon.

I got interested in tarpon fishing over 30 years ago and have spent a lot of time in Southwest Florida – in some of the hallowed hotspots like Boca Grande, and around Fort Myers. I’ve caught several tarpon over 100 pounds and lost many more.

I’m not a tarpon expert by any means, but once you’ve hooked some of them, you’ll never be the same.

Saltwater fly fishing is not nearly as forgiving as in freshwater where you can make dumb mistakes and still catch fish. Tarpon, bonefish and permit require you do everything right and that's a tall order for newbies.

As Billy Pate said in his landmark 3M video series on tarpon fishing: “Do everything right and you’ll still lose most of the time!”

In my experience, tarpon fishing for the giants has sadly devolved over the last decade. It was almost a sure thing in the 80's, 90’s and early 2000’s to go down to Boca or Sanibel or the Keys, spot rolling schools of tarpon and eventually hook up. Good guides were extremely important, but with so many fish and good shot opportunities, chances were good you’d connect with one of these powerful lighting bolts.

In the last ten years I believe environmental issues and increased fishing pressure has taken a toll on the giant tarpon along southern and western Florida. Every year, for the last 5 - 7 years fishing has gotten a lot  tougher. You have the Red Tide and bad water coming from the interior (Okechobee), polluting the fragile inshore nursery areas.

The fish do not roll or porpoise nearly as much as they did through the earlier years. So it follows - if it’s more difficult to see the fish, it’s much more difficult to set up for a shot. Without rolling tarpon, you are relegated to staking out on a light colored sand flat and playing the waiting game. Most often when the tarpon appear, it's too late for a good presentation. This is quite boring (easy for the guides, though...) and not my idea of fun. Tarpon can live to 50 years of age and I believe they have gotten gun shy of the constant barrage of boat and fishing pressure as the migrate up the west coast.

I’ve spent most of my time during the prime key tarpon seasons in Boca Grande, Florida. For the last five years, it’s turned out to be a very expensive boat ride with the going rate approaching $750/day. I never hooked a fish in that time and had few opportunities.

My first encounters with tarpon began in the Cayman Islands over thirty years ago. My wife and I were vacationing there and we connected with a displaced guide from Wales who put us on to baby tarpon in some of the vast array of mosquito control canals dug inland. The water is a dark tea color and you throw a popper or streamer to the nearest rise you can find. When a tarpon explodes on your popper....well, I’ve been a big fan ever since!

Baby tarpon are considered young fish running 5 to 15 pounds. As they get bigger, they are called juvenile or adolescent tarpon and weight 15 – 50 pounds. The smaller fish inhabit inland creeks and lagoons and stay close to mangrove laden shorelines until they reach a size large enough to join schools of pelagic juvenile fish.

Many of these fish return to the area of their birth seasonally and can be targeted along with their younger brethren. These are mainly sexually immature fish. By the time they reach about 45" in length and over 50 lbs, they start hanging with the giants and become sexually mature and develop a migration pattern that are fairly well documented.

Baby tarpon do all the things the giant tarpon do – they hit hard, immediately leave the water, throw flies and lures, and fight as hard as any fish on the planet. The difference? There’s a lot more young tarpon around in certain regions, they’re more easily accessible, and their habitat is not threatened nearly as much as in the U.S.

The Yucatan region, especially the northern tier, is a haven for baby tarpon and a wonderful place to visit and fish for these smaller silver kings. Don’t ever discount their relative size. They are extremely exciting to pursue and many of their favored haunts these days will take you to friendly and safe places in Mexico.

For an excellent overview of saltwater fishing opportunities in Mexico, check out, “Fly Fishing the Yucatan” by Rod Hamilton with Rhett Schober and Nick Denbow.

I’ve made many trips now to the northern Yucatan where the tarpon fishing is still somewhat undiscovered. There are a myriad of coastal towns stretching from the metropolis of Campeche all the way around to north of Cancun.

Rods
For you bass fisher-people out there, your #8 wt will double as a great choice for baby tarpon. I always bring a 9 wt and/or 10 wt - along in case we trip over some larger fish. My Maxxon Salish #9wt and the new Aurelius #8 wt from Maxxon, have held up very well during recent trips battling fish from 10 to 45 pounds. So for around $150 – 200 you can have the time of your life while others are paying $600 – 800 for the fancy ones. Maxxon is soon releasing their Salash saltwater rod series. Author's Note: I used both the #8 and #9 wt in Campeche in December 2020 and those rods performed flawlessly and made long casts easy.

Remember it's a good idea to bring 10wt for larger tarpon and/or is you get a shot at big jacks or permit. 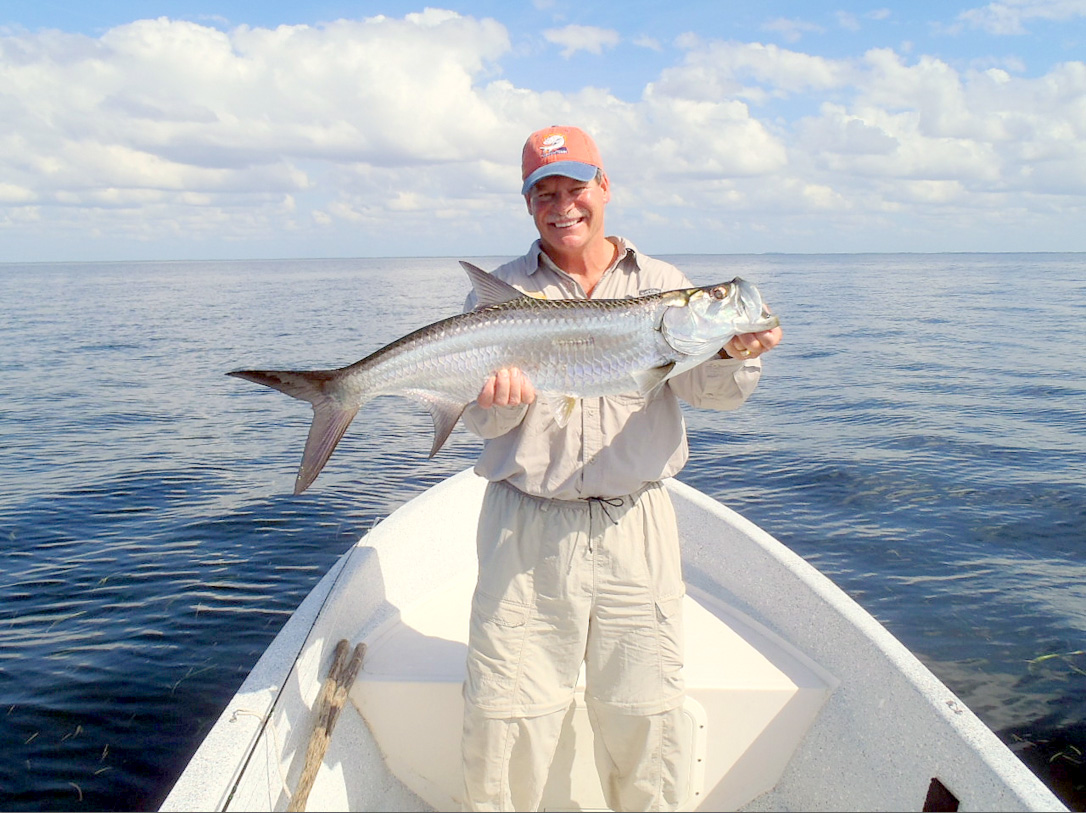 Reels
Reels are important, but not as much as you are led to believe. The prevailing wisdom used to be – you needed an expensive $500 saltwater reel to tango in the salt. The new imported CNC machined reels today are excellent and hold up against any saltwater fish you encounter for less than $200.

Chances are you’ll be in a guided “panga” (Mexican version of a flats boat) and if you hook a screamer, you just fire up the outboard and lay chase to the fish before you get spooled.

Line
Floating fly line for big game fish works great. It’s good to carry an Intermediate Sink Tip as well if you find fish in a bit deeper water. Most of your fishing will be done with a floater. Even your bass bug line will work fine in the salt. I personally love the RIO QuickShooter Saltwater line. It stays limp and shoots like a gun. I use it for any saltwater quarry - be it tarpon, bones, jacks, etc..

Casting and Hook Set – Read this section a couple of times!
I’ve seen many a grown men and women wilt when faced with a head-on shot at a school of tarpon. I’m also speaking from many humiliating personal experiences. If you are going to take the time and money to pursue tarpon in Mexico (or elsewhere) there are two things you must do, in the follwoing order of importance:

I remember well my first shot at mid-sized 50 – 80 pound tarpon in Belize. A perfect straight-on shot at a six pack of nice fish coming right at me.

I made a decent cast and began stripping. A fish broke out of the school and opened it’s bucket mouth to inhale my fly. Just as it was clamping down on the fly I managed an ill-fated “trout-set” and rescued the fly safely up and away from the surprised fish (and guide).

The guide in the back of the boat simply exhaled a disgruntled, “Oh Sheeeet!” Since then I have tried my damnedest to strip set and it works very well. You simply must force youself strip set!

Double Haul
Don’t kid yourself into thinking because you show up your buddies on the trout stream or bass river – you’ll kick booty in the salt…you won’t.

You must be able to double haul effectively and shoot a straight line cast at least 40 feet. Sounds easy? Add some wind and big fish jitters and 40 feet is a lot farther than you think! Quite simply most “nubies” are always about 10 feet short of where they need to be to catch fish. I’ve seen it hundreds of times. So practice diligently before you go, especially in the wind and on the water.

Conclusion
If you’ve ever dreamed of going after tarpon, take my advice and with baby and juvenile fish. You’ll learn all the same techniques you can use on the big ones - if and when you go.

In my case, I have so much more fun with the smaller silver kings, I have no reason to switch.